Peat Cutting on Middlemoss, near Langholm.

John Armstrong has worked as a herd on the hills near Langholm for 46 years. Part of his wage for this work is the use of a peat hag on Middlemoss which lies to the east of Langholm on the road to Newcastleton. In May 2012 John spoke to Mairi Telford Jammeh about his work as a herd and about peat cutting and gathering. Here a brief account is given drawing on John’s words which can be heard at our Study website. 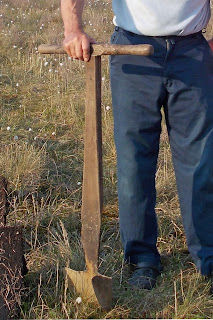 There is variety, as well as understandable commonality, in the form of spades used to cut peat across Europe (see Gailey and Fenton, eds, The Spade, Belfast, 1970). The spade used by John Armstrong is similar in form to that identified by Fenton as an 'ordinary pattern' type found in South-West Scotland (see Gailey and Fenton, 1970, 188). John Armstrong identifies the spade shown as a 'tusker' This lacks a heal or footrest which indicates that the peat being cut is soft enough that it can be cut-through simply by thrusting the spade into the peat without the need for additional force from the legs. The most noticeable aspect of the spade is the lug the on the right-hand side of the blade. This enables the peats to be cut with a clean edge which helps keep the divots or peats whole without fraying at the edges. 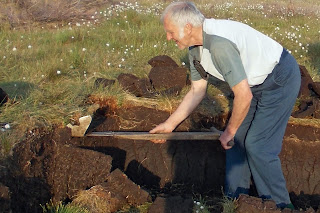 The process is begun by removing the surface layer of the peat moss on which the sphagnum, grasses and other plants are growing. The removed turf is then retained to be placed on top of the land left bare by removal of the peats. This process minimises loss of pasture which is eaten by the sheep which are hefted to the land on Middlemoss. 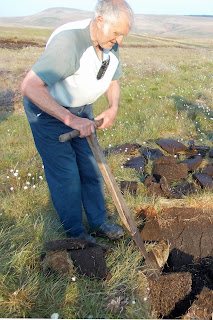 Once the top layer has been removed, the peats are cut by thrusting the tusker to a depth of approximately 2.5 feet/75 centimetres. The peats are caught by a helper who casts the peats or divots onto the moss to begin the process of drying. 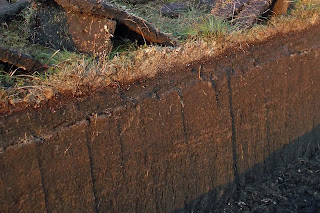 The two layers removed in the process of harvesting peat in this way are clearly evident. Here the surface layer with the living plant material is seen above the much deeper layer of peat which has been removed for fuel. 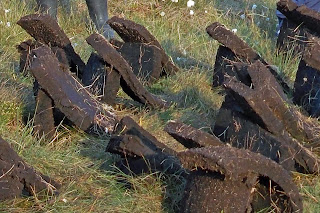 The cut peats are then set-out to dry. After a few days drying a skin forms which makes handling of the peats easier.

The method employed by Mr Armstrong to dry the peats is to place one over the other so as to allow for movement of air around the peats to enhance drying.

Hag: a soft marshy hollow piece of ground in a moor, e.g. where channels have been made by water or where peats have been cut (DSL, http://www.dsl.ac.uk/dsl/).

Hefted: the process by which sheep become familiar with and continue to frequent pasture, the attachment of sheep to a particular pasture (DSL, http://www.dsl.ac.uk/dsl/).

Herd: a keeper of a herd; a herdsman, a cattleherd or shepherd (DSL, http://www.dsl.ac.uk/dsl/).

Tusker: a  spade  with a feathered or flanged blade capable of making a right-angled cut and used to slice out peats with a vertical thrust from the top of a peat bank (DSL, http://www.dsl.ac.uk/dsl/).

Posted by Dumfries and Galloway: A Regional Ethnology at 01:58 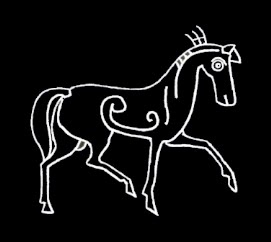